Home / Other Stuff / All Featured Articles / Where to find diner-style breakfast in the UK, and what to expect

Where to find diner-style breakfast in the UK, and what to expect 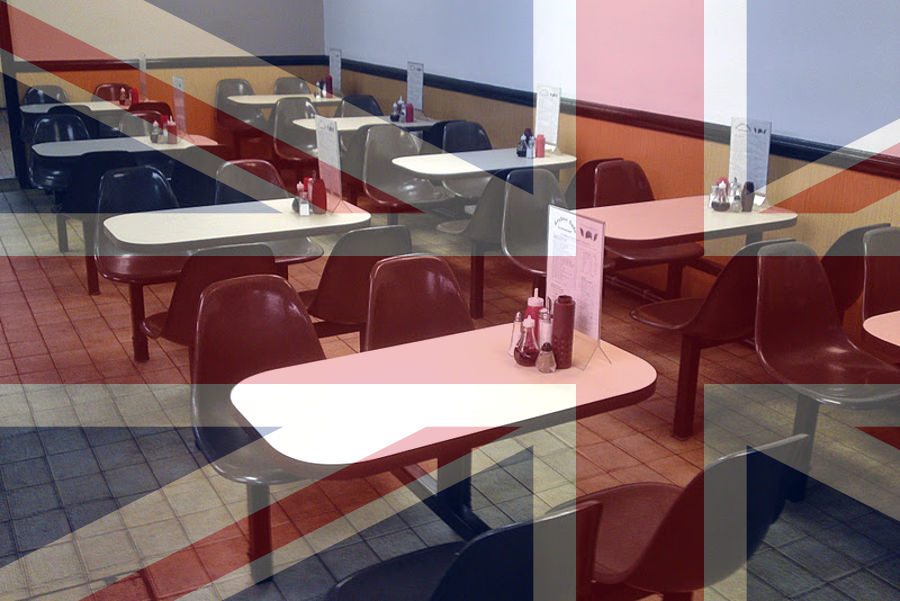 One of my favorite things about travelling is finding local places to eat and hang out for breakfast. So here’s a quick guide for finding the same, in my native UK.

Health-food aficionados: look away. When I go to the US or Canada, there is nothing more satisfying than breaking my fast on proper diner food. I am talking about the kind of thing that invites commentary from cardiac doctors. I particularly like the places where you can get sausages, waffles and eggs with a steaming cup of joe. Served by a jolly server with an honest smile and an eye on their tip. Heaven.

So why would you think any different when visiting the UK?

What to look out for

OK, us Brits are different, and like different food for our first meal of the day. But not that different. Because it’s still hearty, generous and represents all the food-groups (in the wrong ratios.)

All over the UK, you will find what we call a ‘full breakfast’ – normally consisting of:

But let me clarify something very important first…

Failure to get the right name in the right place might result in scornful looks or something unpleasant on your plate.

What you won’t find

Forget pancakes and waffles and your maple syrup. You won’t find them. The idea of something sweet on the same plate as a sausage and bacon is, to most Brits, a repugnant proposition. Breakfast is an entirely savoury affair, unless of course, you enjoy three spoons of sugar in your cuppatee.

You’d be hard pushed to find corned-beef hash. And grits – 99.999% of Brits won’t even know what this is. Unless the restaurant is catering for North Americans.

You will find scrambled eggs, but you won’t find it with bell-peppers and vegetables mixed in. It’s highly probable that the scrambled eggs will have been made from bottled ‘egg liquid’ – or worse still – powdered egg (a throw-back from the war-years). Mix enough salt and pepper in and you won’t know the difference.

Where to find it

All over the UK, you’ll find what we call a ‘Greasy Spoon’. Once a derogatory term, it now has come to mean an independent establishment focusing on low price and efficiency. ‘Greasy Spoon’ isn’t a brand, by the way, but you can ask anyone on the street where their local Greasy Spoon is, and you will be pointed to the closest purveyor of a full breakfast.

You might need to look a bit off the beaten path. They’re low-margin businesses, so expect low-rent premises. If you do find one on a busy, city-centre high street then it’s either very good, or you’re paying too much. Or both. Also look for them in bus stations, indoor markets, and in the occasional garden centre. If you’ve found one in a ‘mall’ then walk away – it’s almost certainly an imitation Greasy Spoon and won’t give you that authentic British experience. In the same way that Harry Ramsdens is NOT a proper British fish ‘n’ chips shop.

Look for: No frills. Plenty of spills (not mopped up from previous customers). Cheap decor. Fixed seats, normally in red or brown plastic. Paper napkins. You know – exactly like the diners you have at home.

Alternatively, if you’re out on the road, then look out for the road-side vans that serve food through a hatch. Here you will find the same excellent food, but served very fresh and very hot, at a price you will not believe. My local outlet is known to us as the ‘Gutbuster’ where you can find a 2500 calorie breakfast for about 4 quid (that’s pounds), including a cuppatee. Delicious when eaten at the roadside on a winter’s day. I walk my dog there, because a) it exercises the dog; and b) she can mop up the morsels that fall to the floor and save me embarrassment.

A note about ‘sauce’

On the melamine tables that will withstand a nuclear blast, you will find bottles of ‘sauce’. No breakfast is complete without it.

Presented in the type of bottles that are refillable. There will be a red one, containing tomato ketchup, and a brown one containing ‘brown sauce’ – which I find far superior. Never, ever shake these bottles before use, despite what it might say on the container. BUT if you have the opportunity to, let someone else use the bottle first, before squeezing it onto your plate. If all is OK, squeeze liberally.

A note about service

Do not expect friendly service. At least in the sense that you know. In fact if you’re received by a jolly, smiling proprietor then you should be suspicious. Breakfast is a time for eating and staring into a cup recovering from the night before – not chatting and cracking jokes. And whatever you do, don’t tip. Tipping is counter-cultural at this time of day, and will rile the other customers who you’re putting under pressure to follow suit.

A note about ‘restaurants’

Any establishment that advertises itself or brands itself as a ‘restaurant’ won’t deliver your authentic breakfast experience. This is true of almost all traditional British purveyors. Let me illustrate: