Home / All Featured Articles / Leader / Professional / Freelancer / Graduate / What type of Networker are You? (Bicycle Wheel or Spider?)

What type of Networker are You? (Bicycle Wheel or Spider?) 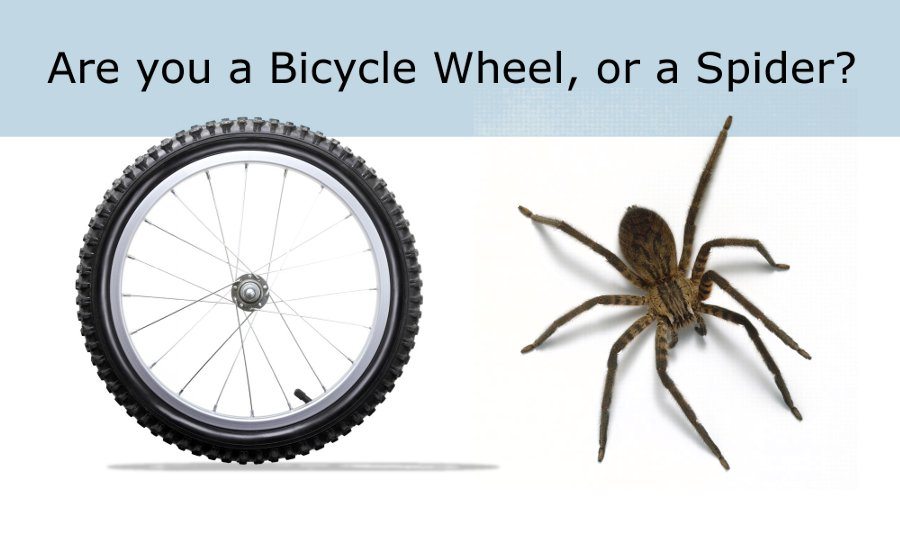 You are a Bicycle Wheel…

In other words, you do not actively encourage and create connections between the people in your network. There is likely to be connections between these people, but not created by yourself. You may deliberately choose this. Maintaining relationships can be hard work. Increasing the complexity of your network can be even harder in perceiving all the links, and the opportunities that exist between them. There is simplicity in a Bicycle Wheel network.

Some people do this because they fear what their connections will achieve together, without them being involved. It can be hard for some people to let go, and not feel threatened. Or jealous.

Some people do this to remain the ‘power broker’ between people. For example, you are connected to Daisy and Phil. Phil needs services that Daisy can provide, so you broker a deal without encouraging a deeper connection, and take your cut.

You are a Spider…

… if you encourage and create independent connections between the people in your network. Like a spider, you create a web around you. A ‘mesh’ of inter-relationships.

Once you connect people, they maintain their own relationships and do not always involve you in the development of those relationships. For example, you might introduce Barry to Jane. Barry and Jane go on to build a strong relationship and start a lucrative business together, without rewarding you directly.

In my experience, Spiders exhibit a great deal of confidence, in themselves and in their network. They don’t feel the need to be in the center of things, and instead, trust that new relationships developing outside of their control are not a threat – but instead perceived as building strength within their networks. They perceive that the value of their network is exponentially increased by every member of the network introduced, either directly or by other people. There is always the risk that a Spider’s network can cut them out, but this is perceived to be worth taking when compared to the benefits. In my above example, although Barry and Jane haven’t given you a dime, you’re likely to benefit by the pure satisfaction of knowing you helped create something, and Barry and Jane will reciprocate in some way in the future. This is the way valuable, trusting connections treat each other.

I am a Bicycle Wheel, but want to be a Spider. Simplicity has been my approach, to date. And perhaps some fear. But the more I develop and achieve my personal goals, the more I have realized that greater things can be achieved by connecting other people in my network. I have begun to connect people within my network and let those relationships flourish independently, accepting the ‘risk’.

Are you Bicycle Wheel or Spider? Share this by leaving a comment below or starting a conversation in my Community Forum.

Share this…
This post is part 7 of 20 in the series Getting to Know Colleagues
Tagged with:     networking