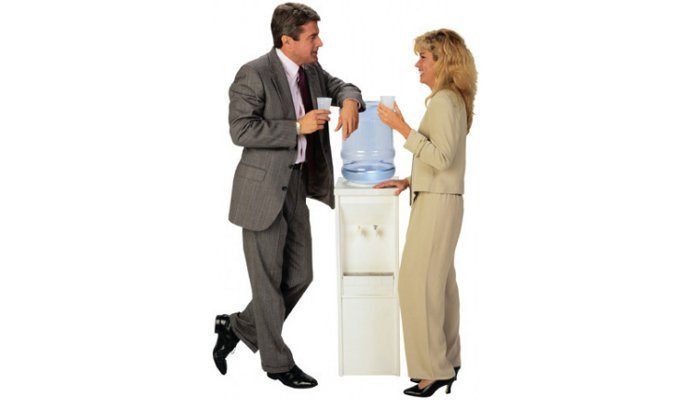 Only a few years ago, the gossip in the workplace centered around the water-cooler; a meeting place where the latest news about colleagues and management-decisions were discussed and often bitched about. More recently, the water-cooler is becoming lonely. Social media is taking over as the gathering point for gossip. Has it for you?

If you don’t Facebook, you probably know someone who does. (Why don’t you Facebook?) Or maybe you prefer something more high-brow like LinkedIn. Social networking platforms enable you, your friends and your colleagues to relate to each other, provide support , argue – whatever you feel like talking about. It’s a gossipers paradise. You don’t even need to be in the same country, let alone floor of an office.

And why not? It’s fun! It’s an easy way of sharing your news and taking a quick break. We all need a break. Because of that, more and more people are using Facebook in the workplace. Do you?

Why do you use social networking whilst at work?

Sarah Perez shares the results of research conducted by Nucleus Research on the blog ReadWriteWeb. Their study tells us that 87% of the 237 people who responded admitted that their use of Facebook has nothing to do with their work, which resulted in 1.5% drop in their productivity. If this research is read by your boss, what would the reaction be? I expect that FACEBOOK.COM would be blocked right away… or maybe you’d accept a 1.5% pay cut? (Err… nah! Don’t think so)

Do you agree with the conclusion of this research? Does your Facebooking time result in less work?

Personally, I don’t agree. For many people, taking a break from work – even a few minutes – gives us time to sort the clutter in our heads and allows us to get focus and clarity on the job in hand. If you’re like me, a short-term distraction gives your inner-brain an opportunity to solve the problems your working on without you becoming tired or frustrated. I’d say my productivity increases, significantly.

In 2008, the conclusion that Facebook reduced employee productivity was also being challenged by Goldsmith College in London, UK (as reported by the Telegraph newspaper). The research discovered that most of the 1,700 workers surveyed felt more productive after an ‘e-break’ (using the Internet) than they did following a traditional kind of break.

Sarah Perez also shares research performed by the University of Melbourne which confirms this view. The research concludes that people who take short breaks are, in fact, 9% more productive. Those are not just Facebook breaks, but any kind of break.

At least with a Facebook break, we remain at our desk and contactable…

Where it Went Wrong… (an example)

Did you see this story? To summarize the story: Kimberley Swann added comments to her Facebook profile that she was bored in her job. She didn’t mention her company name in the updates, but those who know her will guess who she is referring to. Her ‘mistake’ was that her boss was also one of her Facebook friends, so he read the comments, got pissed off, and gave her the boot.

Do you think this is fair?

If she had said that at the water cooler, would Kimberley have been treated the same way?

The two sides of this debate are a) employers don’t want their reputation damaged in the public eye, b) employees want to share views on their life (of which work is a significant aspect of) with friends in a private forum.

So doesn’t the debate center on what is ‘public’ and what is ‘private’? In the case of Facebook, you actually have to be a ‘friend’ of someone to see their updates, which requires mutual consent. In the case of other platforms like Twitter, you can follow the updates of anyone you like, providing they don’t block you or mark their updates as private. So is it reasonable to claim that anything you write as an update to your Facebook profile is ‘private’ and therefore confidential?

It’s a grey area. How does your employer know how selective you are about who you make friends with online? Employers are bound to take the side of caution. Still, does it make it fair to restrict what an employee says in a private forum, no matter who is a member of it? I think it is unfair – damned unfair – but I don’t make the rules.

Until social networking becomes accepted as the norm by employers (which is an inevitability), should we exercise some restraint if we want to avoid any kind of recrimination, regardless if we think this is right or not?

My advice – use common sense. If you must bitch, make sure there isn’t anyone connected to you who will be offended. Yeah this is really boring but if it’s my livelihood at stake I’d rather make sure that wasn’t under threat.

The other thing I suggest you do is to find out if your organization has policies that specifically govern your use of social media. You could simply ask your boss what the deal is with commenting on Facebook.

Organizations must begin to treat its staff like responsible adults.

Contribute to the Debate

Do you think Kimberley Swann faced rough justice? Or was she just being naive? And do you think that your use of Facebook at work is legitimate?

1) Take the Facebook at Work survey to see how you compare with your peers. Results will be posted on 15 October 2009. Subscribe to the RSS feed to see them.
2) Leave a comment below and tell us your opinion