Freelancers, Could You Benefit From The Bartering Economy? 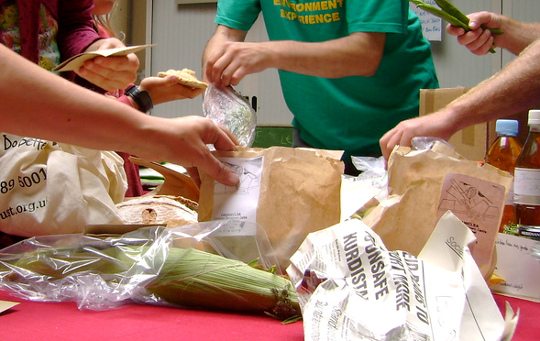 Could the ‘bartering economy’ help your freelance business? Thousands of businesses think so. It could save you shed loads of money and build new business relationships too.

The bartering economy is the oldest form of economy around. Before coins and banknotes appeared, bartering was the only way you could get food (if you weren’t a farmer), clothing (if you didn’t know how to sew or tan leather) or exotic fruit (if you didn’t live in the tropics).

When I started school, my mom would give me potato chips to take as a mid-morning snack. Not satisfied with the usual flavors, me and my buddies would often swap chips. Some kids were lucky and had rich parents – they were the ones with the real tasty flavors and the more prestige brands (like Monster Munch, pickled onion flavor.) So I would have to swap 2 chips for one of those. It seemed a fair trade!

I was bartering with the other kids. I’d joined a microcosm of a bartering economy that specialized in potato chips.

Later in life, I bartered other stuff – often the crap presents I’d received after a birthday or Christmas. In my professional life, I have bartered too. I’ve often done work for a local business in exchange for beer, or a service of their own. Currently, I am building a website (I did that once!) for a neighbour who is an architect, and he is going to design my new garage.

What’s great about it is that no money changes hands, and no taxes are levied. It’s a real cheap way for me to have my bespoke garage designed by an architect, and of course he gets a great website built by someone who hasn’t used notepad in 10 years…

The point is, bartering creates one of those unique outcomes – a win:win. If you have read my article on freelancer negotiation, I don’t believe in win:win outcomes where money is exchanged. But when bartering, there is much less need to go for the jugular – it’s a friendly agreement that doesn’t find its way onto the books.

I think all freelancers can benefit from bartering. Freelancers are specialists, and with that comes a high price, and ultimately, high taxation. When two buddies exchange services, why should you always assume the IRS should have their slice of the action?

Before I go on, I should point out that the legalities of bartering and associated tax differ from country to country, but in most, business bartering is STILL taxable, and still represents a cash value. When done between businesses, bartering isn’t a way to avoid tax. The kind of bartering I am referring to is a personal exchange of services between people who have formed a relationship outside business. Luckily for freelancers, these kinds of relationships are very common.

A great consequence of bartering is that the whole process is based heavily on trust, and if that trust is honored then what results is a strong relationship. (Maybe your buddy might even refer you to their peers and their own customers…?)

If you have a buddy who is a freelancer that you could exchange services with, why not ask?

A word of caution – I advise speaking to your accountant before you barter. There may be some consequences, especially if you use raw materials in the process. Those materials have to be accounted somewhere, and they would appear as a loss on your books.

Bartering between buddies is strictly an off-the-books affair, and is complementary to business rather than a replacement. Avoid turning a personal exchange into a business exchange and it could save you serious money if done right!

As I mentioned above, business bartering is different. When goods are bartered, it has a cash value that tax must be levied against. Both sides of the exchange have to pay it. So an exchange of goods worth $50 counts as a $50 sale, and a $50 expense.

There are advantages for the freelancer who barters in a business relationship. Because (most of the time) no money really changes hands, both sides of the exchange value their services at the same price point. So why not agree a low price point to lower your tax liability? Nobody, especially the tax man, can tell you how to price your goods (assuming no loss is made when viewed as the cash equivalent).

Sometimes the value of the exchange isn’t always initially the same, just like my school-day example of the premier brands of chips. What then? In these cases, something called a ‘Boot’ is added to equalize the value of the exchange. Say you’re designing a logo in exchange for a TV, and you don’t think the TV is worth enough for your time. You’d ask for a Boot; it could be a wall bracket to hang your new TV on, or simply some cash.

If you’re considering using business bartering, I strongly urge you to speak to your accountant about it and check out the legailities and how it will affect your tax.

Bartering is Best When…

Bartering comes into its own when you have over-capacity or you’re over-supplied. In other words, it’s a very efficient way of exchanging surplus for value. As a freelancer in a knowledge economy, the thing you might have most surplus of is time. If you’re not fully-utilized, then that spare time goes to waste and returns no real value to you. So if you can exchange it for something of real value, it makes total business sense.