Home / Other Stuff / At Last! You Can Get Rid of the Mobile Label Printer, and Pick Up the New Blackberry 8220 Flip

At Last! You Can Get Rid of the Mobile Label Printer, and Pick Up the New Blackberry 8220 Flip 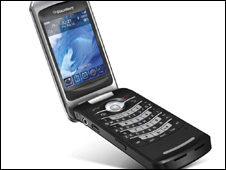 Finally! RIM comes out with a version of their ubiquitous Blackberry device that doesn’t look like those mobile label printers that warehouse clerks and IT quartermasters use! So you don’t need to be embarrassed again for holding one up to your ear in front of your esteemed business colleagues.

Up until now, using my Blackberry as a phone is an awkward affair. Not just because it reminds me of cellphones back in the early 90s, and not just because I look totally goofy in front of my observant peers, but mostly because it’s too big to comfortably fit in the trouser pocket inside the attractive leather ‘sheath’ it comes with. So it was with childish delight, I read about the launch of a Blackberry I could use as a ‘proper’ phone.

The brand new Blackberry Pearl (pictured) looks a treat. Maybe a little bit too much like the Motorola RZR, if you’re familiar with those. It’s been remodelled to prevent Apple’s iPhone snatching their market. It comes out of the box with a 2 megapixel camera (do people really use those though?), a GPS satnav system, Wi-Fi 802.11b/g (for wireless network access), Dataviz Document to Go software (so you can read MS Office documents whilst sat on the toilet) and up to 16Gb of memory, so plenty of space for your MP3s and pictures of your kids.

According to reputable sources, the new device will be on sale in the US this fall. That’s plenty of time for Apple to sell another bucket-load of iPhones.

Will I be getting one? I don’t know is the truth. I have had Blackberry’s since they were first launched and they’re still plagued with bugs and annoying behaviors , so I think I will wait and see what the first ‘hands-on’ reviews say. I haven’t gone for the iPhone, yet.

Tell me if you’ll be getting one!