5 Major Gaffes I’ve Made as an IT Manager 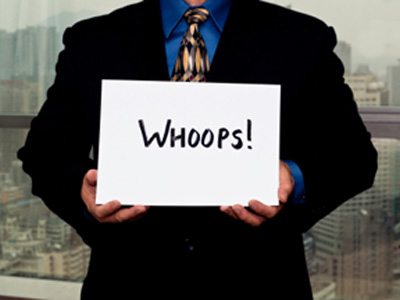 I can look back on my career now and laugh at some of the things I did, and in some cases I cringe like crazy to the point my toes curl up and I look like I am wearing Turkish slippers. Naivety provides great learning . In this article I am looking back at five mistakes I made in the past, and what I learned from them.

Thejendra wrote recently about a common phenomena when ‘Good People Become Bad Bosses ‘. It’s hard for me to say that I recognized some of those things in myself, when I first started out. So what I am sharing here with you are some of the blunders I made to become, in the instant, a Bad Boss.

1) I behaved like a pensioner with my first pension-book – I’ll explain the reference. It’s an interesting myth that when someone draws their first pension, it burns a hole in their pocket and they spend it frivolously. Likewise, when I was first put into a management position, I felt that I was in control of the world and behaved like it. I asked to see the CEO about something (looking back) was trivial. I supported my team in taking pointless action. Etcetera, etcetera. I let the new ‘power’ and ‘authority’ go to my head. It wasn’t long before I was thrown into the brig after bypassing my boss during the CEO howler.

My confidence dropped, which was the worst thing for a new manager. This is very common for new managers though – it happens more often than you think. It’s likely that you may experienced it yourself, or observed it in others. New managers need to trained for management. It is a skill, like typing. Most organizations know this but small organizations like startups don’t recognize the importance of management training, or coaching/mentoring programs to help new managers slot into their new role without making these kinds of mistakes.

As a new manager, I think it’s important to:

2) Making naive promises – when the novelty of management is still high, the adrenalin of power still courses through the veins! One mistake I made when I became head of a department was to feel like I could achieve anything, and in this instance, I was under pressure to knock over half-a-million dollars off my $8M budget to bolster up another part of the business. At the time, I felt it could be done, but I didn’t know it could be done as I hadn’t done the numbers. This could have so easily backfired on me! It turned out that I was lucky. Once I’d gone through the numbers and went very heavy on unnecessary or deferrable spend, I was able to achieve the new budget without any detrimental effect to the service I provided.

To avoid naivety, I recommend:

3) Trying to buy respect & followership – this one is such a big no-no I hang my head in shame even thinking about it. When I first became a manager, my natural concern was building the respect of my team so I could manage them. This is quite a stressful time for the new manager. Unless you receive loads of feedback on your performance, it’s hard to know if you’re hitting the mark or not. So you find people who will you know will give you positive confirmation. What I did was to find a handful of people on my team that I felt I had the high-ground on, which could have been based on my assessment of their relative capability, age, experience and their confidence. So I could say my targets were the weaker people, and I singled them out for favor. So with these people, I would build closer relationships, I would give them longer breaks and let them go home early, I would invite them for a drink, or around to my home. It was an outward display of favoritism, and boy do I blush even to remember it. My own need for positive confirmation and my fear of being seen as a bad manager meant I invested in weakness and ignored the strength. What a gaffe! So my team ended up being mediocre at best, and I lost some good people. Buying respect and favor is not the way to go. So I recommend the following:

4) Over-protecting my team – Thejendra commented that a ‘Bad Boss’ can sometimes under-protect his team to keep up their own appearance, status or political standing. Yes, that’s bad. But equally bad for the long term is over-protection . When I say over-protection, I mean defending the individuals in my team from all forms of attack. For example, one time I remember was when the COO had a bad experience with a support engineer, and wanted to have him reprimanded. Instead, I defended him by making all sorts of excuses and reasons why the support let the COO down. The tech didn’t even hear that something was wrong. Great job, you might think, isn’t that what you should do? But I think the answer is no in fact, because what I was doing was denying my team learning experiences. In the example I’d given, it was in fact the COOs mistake, and that the support provided was on cue. But the mistake I made was not sharing the experience with the tech and giving him the opportunity to learn that people make mistakes and that in the conduct of support, one should check back with influential users to ensure that all is well. A manager shouldn’t feel he or she needs to protect their team in every instance. Business, organization and politics go together. Managers need to let their teams experience enough of it to become wise to it. The more you wrap a team up in cotton wool, the less resilient they are. Actually, it’s OK to let one of your team be exposed for a while whilst they taste conflict and politics. As long as you’re there to scoop them up if they get into it too deep. So I think managers should:

5) Interfering with established procedure too quickly – I see this a lot when a manager takes over a new team. As part of the muscle-flexing process, the manager makes changes for the sake of it to show who’s boss. Most of the time, they’re really showing their team who is an a*****e. And yes, I was an a*****e too. When I took over a team about 10 years ago in an IT services company, I wanted to show ’em who is the big man in charge, so I swept away procedures and replaced them with what I thought would work. Such as how we agree to work, and how we escalate issues to vendors. What a disaster! Although I can’t say for sure that the procedures I’d decided on were wrong, I know they were wrongly implemented. People were confused about terms, how the procedures worked, who was responsible for what part of the procedure, etc. I hadn’t managed the change properly. Too fast, too soon. I hadn’t even got my feet under my new desk and I’d disrupted the operation. This is a common trait of new managers. I’m not alone in making this mistake, not by a mile! Maybe you’ve experienced this too? To avoid this, managers should:

It has been a little painful writing about these things. I don’t mind sharing the experiences, it’s remembering them in the first place that hurts! Although in truth, they are bloody good learning exercises, and ones I haven’t really forgotten as I rarely repeat these mistakes!