Home / Professional / Graduate / Does Your Boss Hate You? Ask This Simple Question…

Does Your Boss Hate You? Ask This Simple Question… 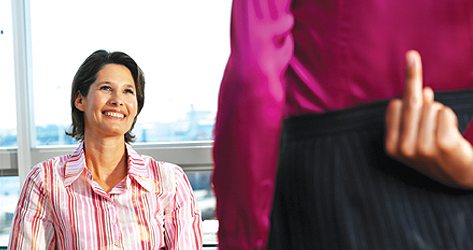 Does your boss hate you? (Sucks doesn’t it?) Here is a tip that could make a break-through…

You might be surprised to know that this is a common problem. More common than you might think! Some of my most read posts are on this subject (I’ve written about this subject before in my posts What Should You Do If Your Boss Hates You? , ‘5 Reasons Why Your Boss Hates You’ and ‘The ‘mystery’ boss: why your bosses behavior may occasionally look strange’.)

One thing I’ve learned, in helping people with this tough problem, is that (wherever possible) building bridges is the best way to go. Feuds, fights and snipes almost always fail. Your boss, rightly or wrongly, is in a ‘legitimate’ position of strength. Unless you can prove some major mis-doing, bad behavior or discrimination, it’s not an easy situation to get out of. But that doesn’t mean it’s impossible, or, that you have to suck-up.

Building bridges is about creating channels of communication, and there’s no better way than to facilitate an open discussion. There is a simple question I’ve found works – one which can be repeated over-and-over and it never gets stale:

What Can I Do Better?

Its simplicity and directness deliver a powerful message to your boss; that you take responsibility for yourself and your work, and for your relationships. Whether the answer you get is poignant or pithy, the question that makes it tough for your boss to avoid criticism. But it’s criticism that you’ve requested, and this is what makes all the difference.

Asking for criticism from a hostile boss puts you in control of the situation. It’s disarming and confident. Don’t be afraid of what will be said, as you probably know it already. Open up communication, and put improvement on the agenda.

Ask your boss today “What Can I Do Better?”

Share this…
This post is part 6 of 16 in the series You and Your Boss
Tagged with:     bad boss, boss, relationships, bad manager