5 Reasons Why Your Boss Hates You 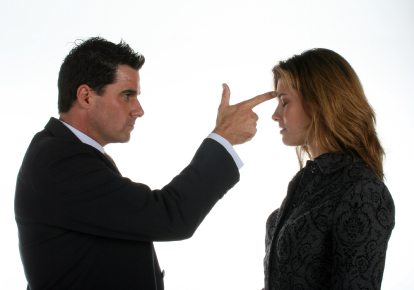 I was with a group of 126 recently appointed managers and we were talking about our relationships with our boss. I just love it when people begin to talk about the subjects that matter to them.

The group shared their thoughts on how they have suffered from bad relationships with their boss, and more to the point, how their relationships turned sour in the first place. It was such an interesting (and enlightening) conversation that I am sharing with you what I learned.

So I discovered the 5 reasons why your boss might hate you (although there maybe more, these are the biggies)

You are a Threat

If your boss believes you pose a threat to their job then they could turn nasty. If you walk around with a halo on your head (put there by your peers, or even your manager’s peers or superiors) then this could be perceived as dangerous to your boss.

This goes beyond the belief of your boss that you are after their job. By building up a strong profile inside your organization, which I fully recommend, it is likely that you a pedestal is also being built underneath you. If your profile creates support and sponsorship by senior members of your organization, then the likelihood of being knocked off is reduced, but there always remains the potential of being sniped off by a jealous boss.

If you suspect that this is the case, then you have a choice – continue as you are and live with the glory and the threat, or share your halo with your boss by ensuring that they always get 10% of the credit. (Number is arbitrary!). You do this by always mentioning their support and guidance as you achieve greatness.

You are Too Political

Politics is a banner of many behaviors, but roughly I am suggesting that your manager may get pissed off with you if you don’t consistently align with the truth and behave like ‘all things to all people’. Politics has its place, but over-emphasis on truth-economies can create distrust between you and your manager. Think about it: if they see you as a skillful player with your peers, then what do they read into your relationship?

If you’re in a politically charged environment (despite best will, this does happen) then it’s always best to disclose your political game plan with your boss. Even if they don’t play too, at least they know what you’re trying to achieve. Create a version of the truth that you both align to and will work together to achieve. Personally, I prefer work without politics, but if you must engage in politics then it’s important to have the support of your manager.

You are Not Political Enough

The flipside to the above, and probably a more likely situation. The higher you climb the pole, the greasier it gets.

Your manager may be playing many angles and operating in grey-areas to achieve an outcome… only for you to come along with an honest and transparent communication to destroy their game-plan.

My feelings towards this are clear – this is your manager’s fault and if they don’t involve you in the game (or at least tell you where the goal-posts are) then that is their problem. Nevertheless, your lack of awareness, or refusal to play, can build up bad feelings which are likely not to be expressed. Your boss’s hatred of you will seem irrational and may be sensed but not directly manifested.

There isn’t much you can do in these situations. Sometimes, a direct challenge might work but the same political behavior will be applied in your manager’s response.

Rapport is the X-factor in a relationship. When two people have rapport, they get along very well and the relationship flourishes. This happens when you and your manager perceive situations, and people, in similar ways and you make similar decisions and judgments based on that perception. Communication is effective. There is cohesion. It’s a foundation of trust.

What about the lack of rapport? The opposite of the above is true. Relationships die at the point of inception when two people can’t communicate effectively or agree on anything. When two people have two parametrically opposite personality traits, then building rapport is almost impossible. If you are a positive person, but your boss is negative, then it will be tough. If you are introvert, but your manager is extrovert, then it will be tough. Get the picture?

I don’t recommend trying to be a person you are not, in order to overcome this. You will come unstuck at some point, and to be frank, you will be miserable and stressed. The best way forward, when faced with this problem, is to just keep working at it. A lack of rapport will diminish over time providing that you and your manager are trying to achieve the same thing. It will be a bumpy road – so expect that – but eventually it will smooth out.

You Don’t Do What Your Manager Expects You To Do

Have you become upset when a mechanic didn’t fix the problem with your car? How about when your credit card company didn’t switch off payment protection, even when you ticked the option? It’s the same when you don’t do what you said you would do. Your manager gets pissed.

In modern organizations, strategic goals are cascaded from the most senior executives to junior employees. Your manager’s objectives are dependent on you achieving your objectives… and so on. If you don’t achieve your goals, your manager doesn’t too.

Worse still, your manager’s reputation can be drawn through the mud. Your failure could be a direct hit on your boss’s credibility. If this failure is caused by forgetfulness, or bad judgment, or incompetence then you can expect your manager to be upset with you. Persistent failure like this can lead to total hatred!

A more dangerous ground to tread on is when you’re going hell for leather for a goal that is different to the one your manager expects. It’s dangerous because the point of realization that your expectations are different is towards the end of the project or assignment. You might get into this situation if you and your boss haven’t built rapport.

This situation may be a deliberate coup by your manager if they’re playing political games or if they perceive you as a threat. Unless your objectives are clearly understood in the same way between you, your manager has a ticket to call foul at any point.

Truth is, managers rarely resort to these shenanigans, but much more common is a surprise moment a long way into an assignment when both of you realize your mistake of a difference in expectation. This is why it’s vital that you and your manager agree specifics, with little (or no) room for different interpretation. Especially so if your performance management, and your bonus, depends upon it.

I believe that total alignment of expectations is the only way to avoid pissing off your boss, and indeed achieving what they expect from you. I recommend you take a look at your current assignments now and check with your manager that your intended output is what he or she expects.

StumbleUpon
This post is part 7 of 16 in the series You and Your Boss
Tagged with:     bad boss, bad management, boss, goals, manager, objectives, performance appraisal, performance review